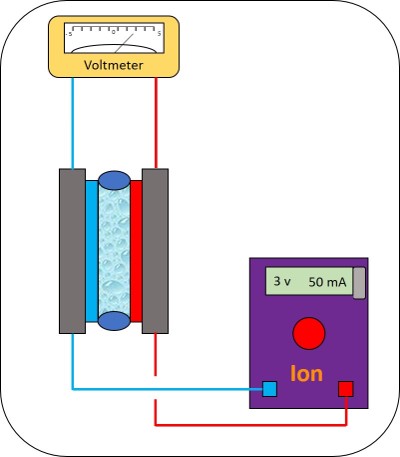 Perhaps unsurprisingly, a key aspect of electrochemistry, is the electricity.

I know, ground-breaking stuff! As I’ve discussed a lot recently, the Ion electrochemical reactor has been developed with a lot of different features, like temperature control and operation under pressure, but I realised I’ve never actually mentioned the important bit – the electrics.

The Ion will have its own power supply, but up to this point I’ve been working with an early prototype. A really important feature has been that I can set the desired current and monitor the change in the voltage, or the other way around. Mostly I have been working in a current limited mode, and been adjusting the concentration of my electrolyte to achieve the voltage that I need – this is quite important, because if you have too high a voltage your reagents or products can just be pulled apart and you get ions all over the place. Not enough voltage, and nothing happens.

Another handy thing about fixing one parameter and allowing the other to vary is that I can monitor that variation with time – in this case I have been using an external logging device to watch changes in the voltage, but the Ion’s own power supply will come with that function built-in. This is useful for a couple of reasons: firstly, it makes it very clear when the substrate has made it into the reactor. The system solvent does not contain any electrolyte, and so the conductivity is poor, and stays constant. As the substrate enters the reactor the conductivity increases and so the voltage (in my case) needed to achieve the current reduces:

It makes it clear when the reagent is in the reactor which is important for collecting the steady state for analysis. It can also make it very clear when something has gone wrong:

in this image, a build-up of degradation products caused a small short-circuit in an early prototype. The good news is that tracking the voltage with time enabled me to see this right away and stop the experiment, rather than keep running an expensive starting material. The design has also been improved to prevent short circuits like this from happening.