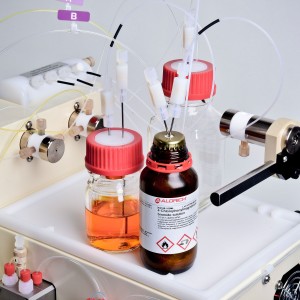 Sometimes only a really strong base will do, and at times butyllithium (BuLi) is the only real contender. BuLi is used a lot in batch processes but, because of its often exothermic behaviour, it is an ideal candidate for flow chemistry –  Especially with a reactor that can cool to -70 °C and has pre-cooling on all of the reagent lines coming in.

The most common issues with organolithium reagents is how quickly they become deactivated if they get exposed to moisture, and that some can flame on contact with air. I’ve used n-BuLi quite a lot in flow, and I have to say, it makes it much easier. I suppose it is important to say that n-BuLi is really rather tame compared to its more energetic brother t-BuLi, but the principle is the same. The major benefit of handling it in flow, is that the BuLi doesn’t actually come into contact with air at any point, preventing it from being deactivated.

Or catching fire. Which is usually an advantage.

We use long needles on our aspiration lines (called the organometallic kit) to pierce the seal of the BuLi bottle and pump it directly, without having to try and dispense it first. This is especially easy with the V-3 pumps of the E-Series or R2S. I can also put an inert supply over the bottle to make sure it stays dry. The inert gas manifold on either system makes this simple, and unlike the traditional balloon, the supply doesn’t run out.

Now, you might think that running a solution that can very easily form solids if there is moisture present is a bit risky in a flow reactor, but to be honest the way to solve the problem is exactly the same as you would use if preparing for a batch reaction – dry the system first. It’s quite easy in flow, take an anhydrous solvent, preferably one that is quite hygroscopic (methanol works well) and flush the whole system with it, then I usually flush this away with anhydrous hexane, but THF works perfectly as well. Test everything is dry by pumping a small slug of BuLi – if it fizzes when it comes out of the end you know it was dry…

The next Blog post will be about high speed small scale solvent evaporation and will be available from Wednesday 21st November 2018.